What is still being held back in Cabinet papers release?

The annual release of Cabinet documents from 20 years ago is generally seen as an exercise in transparency, with the public able to get an insight into the issues considered by the government of the day, and the advice given by various ministers.

In the National Archives of Australia’s January 1 release of Cabinet documents for 1996 and 1997, the first year of the Howard government is documented, including how it dealt with gun control, native title, immigration and other issues still felt today.

But there are still some documents that aren’t released to the public, or are only released with big black boxes where the information is still considered too sensitive to be made public.

Advice given to the Howard government about the expansion of US military operations at Pine Gap outside Alice Springs is still subject to redactions, because it contains “information pertaining to Defence plans, operations or capabilities of continuing sensitivity”.

One of the documents is marked “SECRET AUSTEO,” which means for “Australian Eyes Only”.

What is known is that then defence minister Ian McLachlan recommended the government approve plans to expand operations at Pine Gap to include a Relay Ground Station at the facility.

While the Pine Gap station had existed since the 1960s, the proposal came after the US announced it intended to close a similar facility at Woomera in South Australia.

Official cabinet historian Paul Strangio said it was unusual for the documents to be redacted, and that most redactions were in Cabinet documents relating to national security and foreign affairs.

“It does pose really interesting questions I think in terms of fundamental principle – the idea of moving from 30 years to 20 years – most people would support that and think it’s a good thing but it does mean of course some of the issues, there’s a greater likelihood of sensitivity,” he said.

Cabinet’s national security committee agreed to support the proposal under the conditions that Australia could “exploit the capabilities of the system to address Australian Defence Force (ADF) interests” and would be enabled “to make a contribution to performance of the system’s missions”.

The government also wanted it to be ensured “that Australia has full knowledge and concurrence of the operations of the Relay Ground Station and the wider system it supports”.

The most redacted section is under the heading “Functions of the RGS,” and while its known capability to detect the launch of intercontinental ballistic missiles is explained, every other statement about its functions is fully or partially redacted.

A screenshot of a page of a Cabinet document from 1997 regarding the US Defence facility at Pine Gap. Released as part of the January 1 release of Cabinet documents, it is still heavily redacted.CREDIT:NATIONAL ARCHIVES OF AUSTRALIA

Cabinet was advised that Australia being aware of what was going on in the facility “is important from the standpoint of sovereignty” and that the US had given “high level assurances” that the measures outlined in the submission would be “reflected in the Implementing Arrangements”.

Cabinet was told to expect criticism “by issue motivated groups opposed to a US presence in Australia, or to cooperation with the United States in ballistic missile early warning”.

It was also told the facility “would prolong cooperation in a mission that has been a central strand of the alliance relationship for over 25 years” and would be in Australia’s interests. 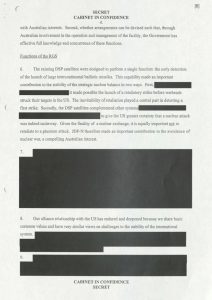 redacted by The Australian Government – so much for budget honesty!