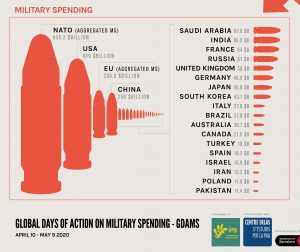 PM Morrison has opted for the easy way out of dealing with economic problems brought on by the Covid crisis.  Instead of an Australia better equipped after the virus we will be only be better armed even though we have no enemies.

“The Morrison’s approach is lazy and backward which feeds into a fear factor about war and strife in the region which Morrison has picked up our supposed allies the US.” Said Denis Doherty.

A Brown University Study (USA) 2017 May 25 declared “$1 million in federal spending creates fewer jobs than the same spending in nine other areas. Spending on elementary and secondary education creates the most jobs, at 19.2 per $1 million.”  The same money on the military created 7 jobs!

These nine areas include infrastructure, education, clean energy, health care and so on.  The Morrison Government is just too lazy to devise plans to improve Australia rather than to waste resources on the military which is already over supplied with exorbitantly expensive weapons.

Australia’s arms companies are already heavily subsidised to create weapons for use in the Yemen and Palestine conflicts so instead creating tools for human rights abuses we could be doing good for less fortunate countries.

“We call on the Morrison Government to realign its priorities to providing for social needs for all Australians not just for the military.