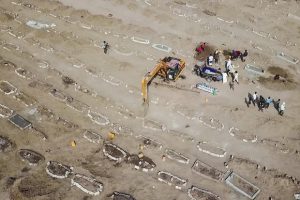 Yemen in the news SMH May 26

At a cemetery in the Southern city of Yemen (Aden) there has been a spike in deaths amid the covid-19 epidemic.

Amman, Jordan — Chaos in war-torn Yemen is obscuring the “horrific” extent of the coronavirus epidemic in the country, leaving scientists to make educated guesses at the number of deaths caused by the disease based on burials. The estimates are grim: the crippled city of Aden alone has likely seen a five-fold increase in deaths since COVID-19 arrived.

“The number of deaths occurring in the COVID-19 treatment center that MSF runs in Aden, Yemen, speaks to a wider catastrophe unfolding in the city,” the group said in a statement, calling on the United Nations and donor countries “to do more urgently to help the response.” MSF

Australia is sending weapons to Saudi Arabia to continue the misery in Yemen!

No War on Yemen

Background for our members and supporters

Jose Ramos Horta in an article entitled The Pandemic World – A chance to be better,  27 April 2020, said:

Freeze ALL weapons exports to ALL developing countries, for the next 10 years… Remember the slaughter of human beings that you enable with your weapons sales. You argue that you attach strict human rights conditions to your weapons exports. Oh pls, spare me this which you know is a lie.

EOS, an Australian company, is selling weapons to Saudi Arabia and Israel, states involved in human rights abuses, and unjust wars and the deaths of thousands of men, women and children. We are calling for EOS’ export licences to be cancelled. This is one way we continue to call on the Government to withdraw its support of the arms trade and to lessen its military spending.

We ask you that you:

Please paste in the letter in blue writing below and address to appropriate person. Please amend in any way you prefer and add anything that adds to the case.

In view of the many requests from world leaders to refrain from conflict during the virus pandemic, the Australian Government should refrain from selling weapons to Saudi Arabia, Bahrain, and Israel.  In this time of Covid-19 it is important that our country makes every effort to facilitate a ceasefire in the troubled Middle East rather than earning approbation for ruthlessly pursuing profits at the risk of many thousands of peoples’ health.

I therefore call on you to specifically withdraw the license of the company known as EOS to trade weapons into the Middle East.

For emails addressed to the Opposition and the Greens, we suggest that the last sentence be changed to read:

I call on you to make public statements that there must a reduction in military spending by Australia and that the money saved be diverted to our economy and healthcare. In particular I ask that you pressure the Government to withdraw the license of the company known as EOS to trade weapons into the Middle East.