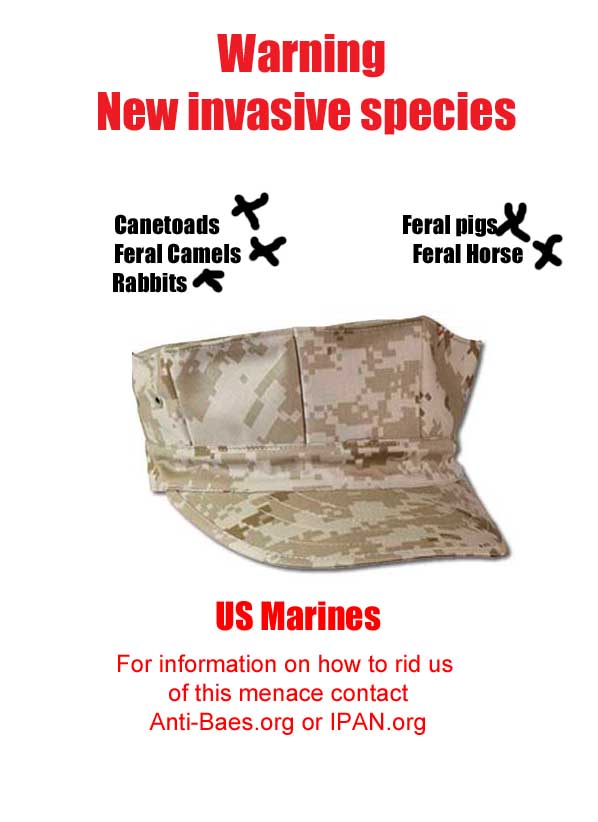 More Marines for Darwin? No! Boot ‘em out!

Anti-Bases and IPAN –NSW peace groups have condemned Prime Minister Turnbull’s agreement in Washington to increase the number of US Marines in Darwin to 2,500 at a greater rate than originally planned.

“This is a backward step which is against Australia’s interests,” Denis Doherty of the Anti-Bases Campaign said.

“Stationing US marines and elements of the USAF on our shores increases tension in the region and indicates that Australia does not want to pursue an independent and peaceful policy,” he continued.

“Why do our governments always obey the US?” he asked.

“Contrast that to Malcolm Turnbull who supports more marines in Darwin even though it threatens our major trading partner China,” Mr Doherty said.

“Housing these US troops costs Australia $2.3 billion already. In addition the US military use facilities at Robertson Barracks, Mt Bundy tank firing range, the Delamere bombing range and Bradfield,” Nick Deane from the NSW Branch of the Independent and Peaceful Australia Network said.

“These areas are fast becoming chemically toxic waste lands and the US forces pay nothing for use of them and will not pay for their remediation,” Mr Deane continued.

“Around the world US Marines bring major problems for local communities. Darwin has been largely free of incidents but how long before rapes, murders and other anti-social behaviour appear?” Denis Doherty askes.

“With tensions on the Korean peninsula escalating the time for calm diplomacy is now.  This is not a time for a version of gunboat diplomacy,” Mr Doherty concluded.