US Bases in Australia

Pine Gap is really about three facilities employing 750 to 1,000 US and Australian personnel

1. a) the Singint collecting
2. b) the DSP and now star wars bases
3. c) the photographic section
4. d) the seismic station in Alice Springs itself
5. e) the town facility -see the web site. It is huge!

This base is largely in mothballs but can activated by the US at any time it deems necessary.
5. a) the communication towers
6. b) the Solar observatory run by the US airforce

13. Mildura
14. There is another one near Wagga Wagga but cannot confirm.

E. RAAF bases hosting outposts of the Military Airlift Command (MAC) of the US airforce are:


F. Under agreements signed long ago - the Royal Australian Airforce Bases (RAAF) are to be made available to the US when required

23 RAAF Darwin
24 Williamtown NSW
25. Townsville
26. others in the north around Kimberley and Cape York

H. The training the facilities frequently used by the US

I. The US change the nature of NASA from the civilian to the military some time ago (10 years ago)

33. Tidbinbulla ACT is a US military base - part of the US Space Command of the US airforce.

J. GPS system has the

I do not think that the list above is exhaustive and I argue that Australian bases which are used frequently and often by the US are then de facto US bases. There is a criss crossing of agreements about the use of Australian military facilities for US purposes. The use of these bases may only be for short periods during the year but the ready provision of them for the use of the US elevates them to US bases.

All Australian military and some civilian airports and seaports are to be put at the disposal of the US military should the need arise. There agreements signed and treaties entered into to facilitate this process. 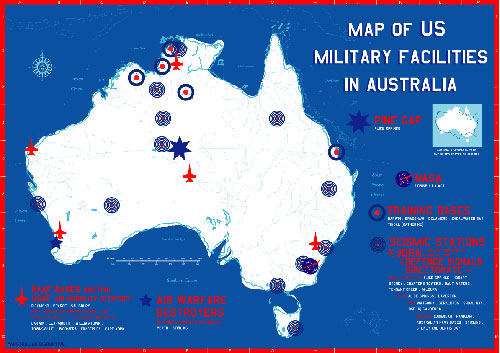